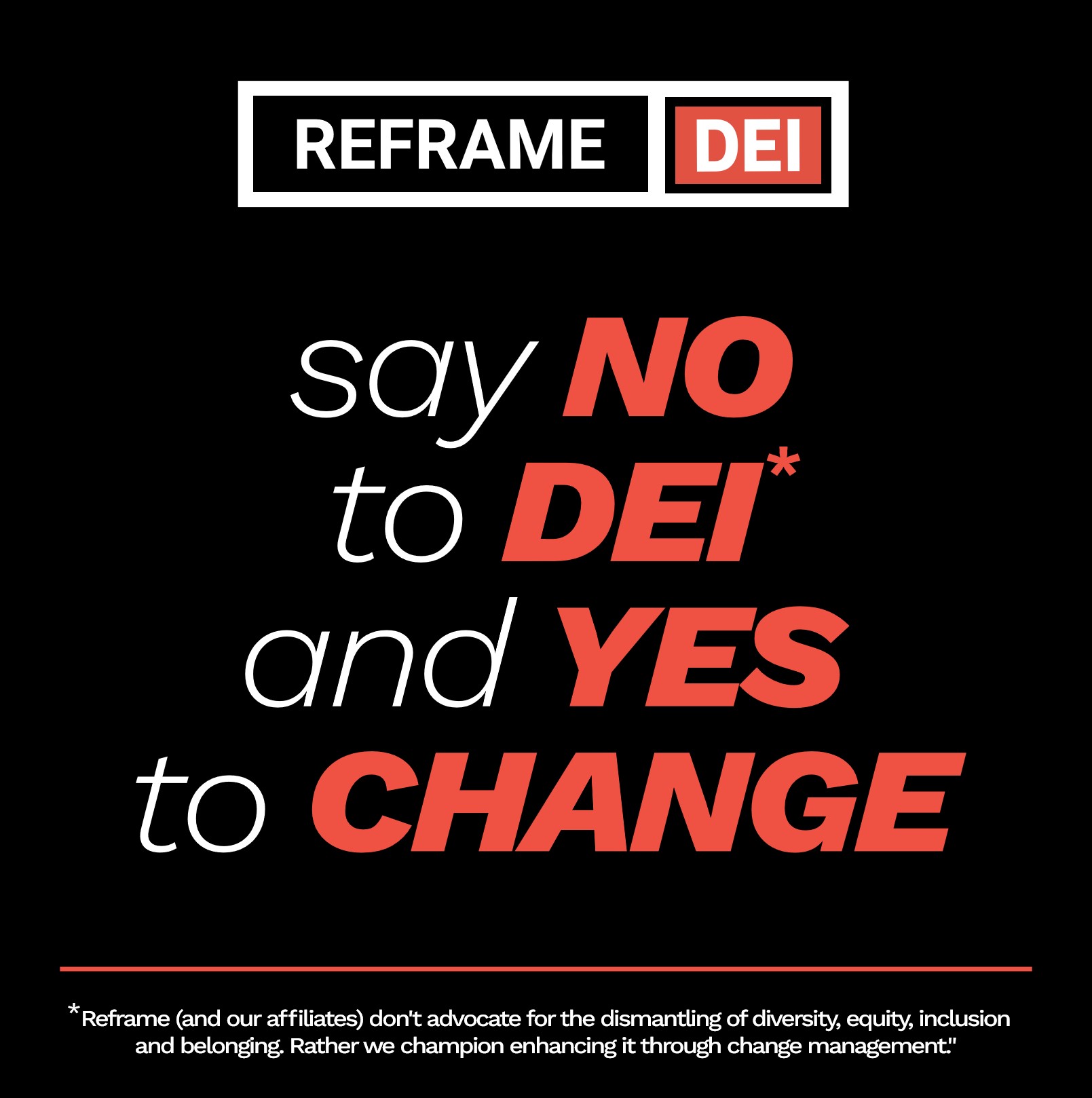 When we were in our weekly Reframe stand-up and someone recommended the “Just Say No to DEI and Yes to Change” as our campaign for bringing awareness that DEI as a practice is not enough to save corporations and advocate for Change Management as a practice for delivering the impact required to culturally transform corporations, it was met with a lot mixed feelings.

After going around the room and asking why, the sentiment in the room was also divided.  Divided because the practice diversity, equity and inclusion is guarded within the C-Suite and Boardrooms and protected.  It is protected because, since the 1960s, it is the practice used to integrate the hallways of corporations.

NASDAQ and NYSE are requiring quotas for boards and for many employees in corporations, they know very little will change and another generation of talent will be lost.

Based on our report we conducted and published in partnership with Suzy Research and WARC, Why DEI Will Not Be Enough to Save Corporations, employees who benefit from DEI efforts believe it will not work.  The original intent of DEI was not set up to structurally change corporations.

From this day forward, what was once considered the minority population is now the majority population.  Every corporation must now structurally change!

The people in the room at Reframe were somewhat fearful.  It is a sentiment for many employees and DEI practitioners within the industry.  The fear comes from operating in a space of scarcity and the idea of not having anything at all to fix this decades-old problem.

We’ve interviewed and spoken to hundreds of employees, practitioners, and C-suite executives since starting Reframe in 2015. Many are fearful of the backlash associated with calling out the inequities associated with the practice of DEI.

We stand by the idea, we’ve done the work and today we are launching the “Just Say NO To DEI and YES To CHANGE” campaign.  Our objective is to say out loud what many are feeling and fearful of the backlash from the dissociation of the practice of Diversity, Equity and Inclusion.

Why Does It Matter?

Without this awareness and advocacy campaign, many CEOs will continue to use practices that actually do not drive Change across the enterprise.  When CEOs want change they actually use Change Management organizations.  If we do not bring awareness and advocacy, then we will lose another generation of talent at a much more accelerated rate because Generation Z is more than 51% BIPOC (Black, Indigenous, People of Color).  The impact is substantial and the return on human capital could be detrimental to corporations.

We Need Your Help.

Beginning today, we are asking everyone who wants to save a generation of talent to:

Over the next several weeks we will publish the results of the Change.org petition.  Please continue to support our efforts.  Near the end of the Just Say NO To DEI and YES To CHANGE campaign, we will share our point of view of what is needed to make the change and impact required to solve a decades old problem.